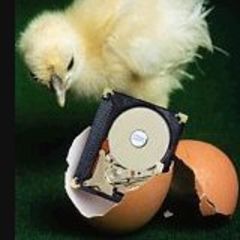 Until a few years ago computer hard drives were bulky devices. No one had ever dreamed a hard drive would one day fit into a digicam and be able to store several Gb of images. IBM succeeded in developing just such a device to fit CompactFlash Type II slots, present in many digital cameras. In 2002 Hitachi took over production after buying the MicroDrive division. Seagate also produce miniature hard disks but the name Microdrive is a Hitachi owned trademark.

The Microdrive comes in various capacities. The largest one can hold a wopping 6Gb of image data, whereas over time capacities will further increase as we have seen with other storage media. Transfer times from camera to hard drive are a bit slower than with conventional memory cards, especially when the drive starts filling up with image data. Any device that uses PC-cards can also use the Microdrive with the optional PCMCIA adapter

Since the arrival of memory cards with up to 8Gb of storage, the MicroDrive has become less popular, not least because it is more vulnerable to bumps due to its a rotating disc and high power consumption. Before you buy a MicroDrive, check your camera's manual to make sure it can deal with its power requirements and higher operating temperatures.