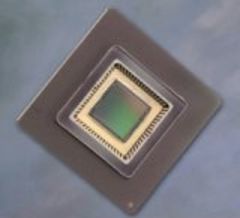 Most digicams use CCD sensors (Charge-Coupled devices) to record an image. Each CCD contains thousands of photosites which can be compared to tiny solar cells. They convert light into electrons. The electrical charge of each cell is then turned into a digital value by an analog-to-digital converter. Their special production process ensures high fidelity and light sensitivity to ensure that the charge is transported across the chip without distortion.

CMOS sensors (Complementary Metal-Oxide Semiconductor) are easier and cheaper to produce because of a more conventional manufacturing process. They also consume less power than CCDs. Still most cameras continue to use CCDs, as until recently their quality, reliability and durability were much better. CMOS sensors are gaining ground rapidly though and they are even being used in (Canon) DSLRs. Quality has improved significantly and  especially the noise issue has been tackled successfully.

Several types of CCD and CMOS are being used. Fuji use their own SuperCCD while Sony uses an extra colour filter on its pixels. Foveon have developed a CMOS whereby every pixel records three colours instead of one. The latest trend in DSLRs is the use of a full frame sensor, which is the size of a conventional 35mm film image.