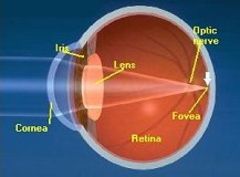 In many ways the eye can be compared to a camera, since it also has a lens and a diaphragm (aperture). In many other respects the eye is quite different from a camera. The latter has a flat image plane where the resolution is quite constant across the entire focal plane. The eye is not like that at all. It has a motion sensor that covers nearly 180 degrees of horizontal vision. Although it only supports low-resolution imaging and provides very little color information, it offers an excellent ability to detect movement through a wide range of illumination levels. This motion detection has proved useful to protect human kind from aggressors and for spotting game while hunting. It is the retina- a thin layer of nerve cells at the back of our eye partially consisting of light sensor cells â which accounts for this very wide angle of peripheral vision. The eye's high-resolution color vision system however has a much narrower angle of coverage and is concentrated around the eye's fovea, which could be compared to the central focal point of a camera lens. It manages to distinguish 7 line pairs per millimeter, which is equivalent to  355.6 dpi. This is almost exactly the baseline resolution of most high quality printers of 360 dpi.