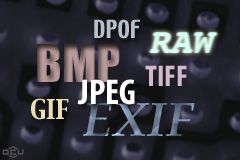 During the age of digital imaging many different formats for saving images have been designed for specific applications. Problem was, a lot of these formats could only be used in their own specific applications because each had its own characteristics. Compatibility between applications was almost non-existent. However a lot of these formats have fallen into disuse and have been displaced by others that ensured cross-platform compatibility. Today most major imaging programs can save and open files in a number of different formats that can be used to transfer images from one application to another.

There are two basic forms of computer graphics: bitmaps and vector graphics. The ones we will concentrate on here are bitmap formats because they are the ones used in digital photography. Bitmap images are formed from a matrix of dots with different colors, also called pixels. It is this number of pixels that determines the size at which such an image can be printed or displayed. Because saved bit-map files are quite large in size, other graphic formats are used to store images in compressed form. Probably the most well-known of these are JPEG and TIFF, about which we will tell you in detail later.